The first record of any club playing the round ball game in Hirwaun appears in the season 1909-10 with a club called Hirwaun United. This club lasted just two seasons. All local clubs then played in the Glamorgan Leagues until 1924 when a group of railworkers formed Hirwaun G.W.R..Again the life span of this club was two seasons. Hirwaun United re-appeared again in season 1927-28 and  played in Division One of the newly named Aberdare Valley Football League. This club played just the one season. 1928 saw the formation of Hirwaun Argyles and the re knowned  Hirwaun K.B.R. The Argyles played for one season only 1928-29.The K.B.R.( Knights of Brecon Road or Keep the Ball Rolling) were two names in which this club were known. This club lasted until 1935 but in their seven year history the club won the Aberdare Valley Football League championship in seasons 1930-31,1933-34 and 1934-35;the Open cup in 1930-31.Hirwaun Welfare were formed in 1934 to coincide with the opening of the Welfare Ground in Manchester Place. This club became the only senior club in the village until after World War 2 when a number of clubs were formed from factories at the nearby Industrial Estate. These included  RFE(Rhigos) (1948-49);Truvox (1947-49);Willbows (1948-49);Concret Utilities (1945-49) these being followed by Murphy Radio (1951-58);Dunlops (1951-61)and Sobells (1961-62).Genefax(a brickmaking company situated opposite the train station was formed in 1961-62.

In the mid 1980’s a record number of five senior teams played in the village alone. The Welfare boasted its usual two senior sides at its clubhouse in Station Road. This premises also housed Oldcastle United (1978-89);Ferraris Bakery (1983-86) and the YMCA (1985-88).

The Lamb Inn/Village Tavern FC a team formed by a breakaway from Hirwaun Welfare in 2005 are still in operation. Other pub based teams include Cardiff Arms FC(2003-06) and Glancynon Inn FC (1999-2010).
The Glancynon changed their name to Hirwaun Football Club in 2010 and are one of four clubs playing in the village. They share the Welfare ground with the Hirwaun Welfare/Mackworth club,The Lamb Inn play at the Sobells Sports Centre in Aberdare whilst P.T.Civils ,formed in 2009 and based in the Lamb Inn play at the Cefndon to the rear of Maescynon. 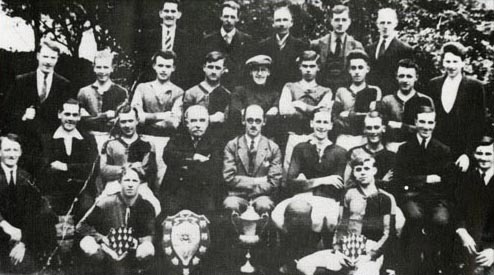 Of all the clubs to have played in the village and surrounding area perhaps the more prominent and major club was Hirwaun Welfare AFC. This club was formed in 1934 and is still in existence today albeit under the guise of Hirwaun Welfare/Mackworth FC operating in division two of the South Wales Amateur League. The club became founder members of the Amateur League in 1947 and have been members for all but three seasons since .In season 1969-70 the club accepted expulsion in order for their Welfare ground to be taken over by the then Aberdare Urban District Council who carried out remedial work to make it one of the best surfaces in the league. For the season 1969-70 the clubs first or Amateur team played in the Neath and District League .In February 1999 the club withdrew from the league citing lack of interest from players and committee alike. Season 1998-99 had been a struggle from the outset and the withdrawal became a necessity. A rally amongst players  and committee men living in the area saw the club revived in July 1999.They took their place in the Aberdare Valley Football League.  Succesive promotions under the stewardship of Ian Sandor and Steve Harding won the club another entry in to the Amateur League. In their first two seasons back the club attained top four finishes but by then the clubs entire junior section had defected to Penderyn Sports.  A year later the entire squad brokeaway to form THE Lamb Inn FC. However by 2008 interest again waned and in a bid to retain its status the club sounded out local clubs to form a merger. Sadly there was no support from Hirwaun based clubs but Mackworth FC a club based on the Gadlys area of Aberdare which had been eyeing the Amateur League for some time but not finishing high enough to stake a claim accepted the invitation and the Hirwaun Welfare/Mackworth club appeared from season 2009-10.

The Welfare club became the first to open a social club for its players,members and families when it purchased the Castle Hotel in Station Road,renovated the entire building and and opened for business in February 1971.The clubhouse boasted a bar,lounge ,toilets and bar serving area on the ground floor,a first floor function room and to the rear in the cellar dressing rooms were constructed for its teams to play on the new Cefndon field which the club acquired from the Vaynor and Penderyn Rural Council in 1974.This ground opened in August 1975 when the club’s Youth team defeated Aberdare Sports A in a round one match in the Aberdare League’s Burton Cup. Sadly the club served its last pint on New Years Eve in 2010 another victim of the signs of the time.

Income generated from the social club enabled the club to form junior teams. Although the club ran an Under 16 team for two seasons (1968-70) teams at all levels flourished from 1974.This move paid its dividends as youngsters such as Mike Reed,Kirk Perzon,Stephen Henry,Malcolm Finn won their places in the Amateur team which were beaten 1-0 by Lake United in the Corinthian Cup Final in 1977 but claimed the top prize by winning the league in 1981-82 under the guidance of Ken Davies.
All clubs in the Hirwaun area played in the Aberdare Valley Football Club except the Welfare as reported above and Dunlops who also played in the Amateur League for two seasons (1968-70).

Junior Football was played by a small number of clubs. The first to appear is Hirwaun Juniors which played for one season 1935-36 then re-emerged four years later to run from 1940-45.The Army Cadets were one of three clubs to play for just one season .They played in season 1948-49;the YMCA 1946-47 and Hirwaun Welfare Colts 1940-41.An Under 15 team at Maescynon played for two seasons in the Aberdare Junior Football League .However it was the Welfare club where youngsters in the community played. A thriving junior section saw teams formed at all age groups. Success came in the following Aberdare League competitions….

The Welfare ground opened on 20 October 1934 when Dan Smith and Sid Stokes scored the goals in a 2-0 win over Llwydcoed Welfare. Both these gentlemen went on to become referees in the league.
The Cefndon field officially opened on Wednesday 20 August 1975 when Hirwaun Welfare’s Youth side defeated senior club Aberdare Sports A 5-3 in a first round match in the AVFL’s Burton Cup competition. For the record the team that historical evening was:-

Anthony Michalski wrote his name in to the history books by when he scored the first goal on the new ground. He went on to complete a hat-trick and other goalscorers were Michael Davies and a penalty from Kirk Perzon.