The Earls of Pembroke had retained ownership of vast lands in Glamorgan for centuries but after the death of Philip, the seventh Earl, they were inherited by his daughter, Charlotte. In 1703 she married Thomas, 1st Viscount Windsor, and until 1758 Hirwaun Wrgant was part of the Windsor estate. On the marriage of the Windsor heiress to John Stuart, son and heir of the Earl of Bute (King George III’s Prime Minister), the name of the estate changed again, first to Mountstuart and then to Bute. The appearance of the Bute Family in 1788, led to the demolishing of many dwellings and farmsteads, within the village, but in 1790 they were taken to court and in a court held at Haverfordwest, they lost their case and from that day until 1869 the Waun, or moorland, was free common land from Aberdare to Hirwaun.

THE COMING OF INDUSTRY 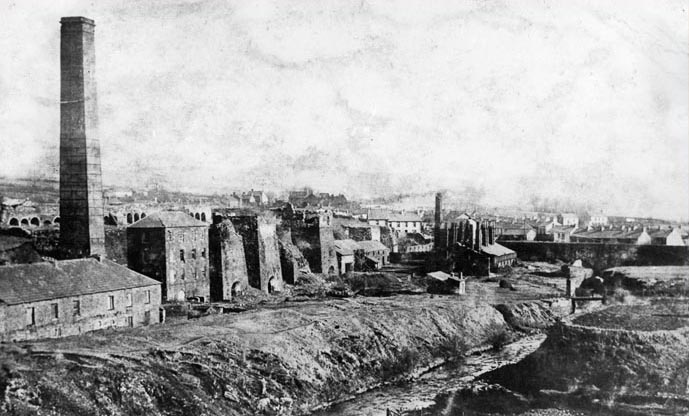 One of the few photographs of Hirwaun Ironworks

In the middle of the eighteenth century, outsiders discovered what the inhabitants had always known, that beneath in unprepossessing agricultural appearance Hirwaun Wrgant had valuable mineral assets.
In 1757 two Brecon gentlemen, Thomas Mayberry and John Wilkins were attracted to the area by the availability of iron ore, coal and limestone and negotiated with Lord Windsor for a lease for the right to dig for iron and coal on Hirwaun Wrgant.

The Ironworks had a chequered early history. The 1757 lease from Lord Windsor gave John Mayberry the right to mine for iron and coal on the common and was also granted of 4 acres of land on Bryn Maerdy on which to build a furnace. Clauses were included to protect the right s of tenants of the Common and a particular provision for the tenants of the hamlet of Rhigos, which stated:

‘To dig for and raise coal and carry away at and from a certain place called Nant ur Ychain….For burning and making lime to manure the Lords land’

The problems associated with the Hirwaun Ironworks became quickly apparent when in 1775 the initial partnership granted the lease to John Wasse and William King. However the partnership failed to follow the conditions of the lease, and after William King died insolvent, the lease was terminated in 1777.

1803
Fresh agreement – Messrs. Walter and Jeffreys Wilkins, now possessed of the John Mayberry and John Wilkins’ interest, agreed with Lionel Oliver on behalf of himself and partners, to pay and increased the rent in lieu of supplying pig-iron.

1814
Bankruptcy of Bowzer, Overton and Co – Lawsuit between Thomas Bacon and Fry the receiver of the Bankrupt Estate.

1815
lawsuit commenced between Walter and Jeffreys Wilkins of Brecon and Thomas Bacon – The Works had become much dilapidated and Thomas Bacon had refused to pay the rent reserved under the Deed of 1780. Messrs Wilkins took the opinion of Counsel (Mr. Taunton) on the case and eventually, as a settlement, they conveyed all their interest in the Hirwaun Works and also considerable amount of freehold land they possessed in the Parish of Penderin and elsewhere adjacent to the works of Thomas Bacon for the sum of £3,000.

The Ironworks had periods of prosperity during the war periods – The Seven Years War, War of American Independence and the long war with France from 1793 to 1814 but there were periods of depression in between. The war against Napoleon created the great demand for the cannon and shot which was produced and transported. These weapons had been facilitated by the building of the canals up the valleys from Cardiff and Neath. In 1808 – 1810 a tramroad was constructed by Tappenden across the Common, past Penrhiw, down a steep incline, to connect the Abernant Ironworks with the canal head in Glyn Neath. Even so, the owners in 1812, Bowzer and Company still went bankrupt. The Neath Canal Company seized two barges with fifteen 18 pounder guns “deposited at the canal co.’s wharf at the head of the canal” ready for transport to the ships at Giants Cave. The following year the Ironworks was put up for auction and its catalogue provides us with valuable, detailed information about the ironworks and village. In addition to the forge and kilns, furnaces and fineries there is a Trevithick’s Steam Engine. Also for sale was:-

The “Family Residence” was undoubtedly Ty Mawr. It is described in detail and said “to have recently put into complete repair” It contained: “Drawing and dining rooms, Gentleman’s room, dressing room, entrance hall, store room, butlers pantry, kitchen, servants hall, scullery. Two staircases ascend to Four principal bed chambers, dressing room, three nurseries, three servants chambers and water closet. Cellars for wine, beer &c” outside there was a carriage yard with space for three carriages, stabling for six houses, a lawn and walled garden, shrubbery and plantations. Among the other inducements offered is this testimonial to the labour force. “The WORKMEN are of the best description for Sobriety and Honesty and good Abilities in their respective stations”

Anthony Bacon of Cyfartha, who leased Hirwaun Ironworks, decided to manufacture heavy canon for the American War of Independence. However he was a Member of Parliament for Aylesbury and the law forbade him making arms. He overcame this problem by producing them in the name of his partner, Francis Homfray. It was under this name that the finished product was taken, by bridle paths on mules and packhorses from Hirwaun to Cardiff.

It was not until 1818 that a buyer was found and those must have been very lean years for the iron workers, miners and colliers.

In 1818 William Crawshay of Cyfartha took over the lease of Hirwaun Ironworks and in 1820 invested in four new blast furnaces, an engine house adjoining on the right and a mill-house on the left. 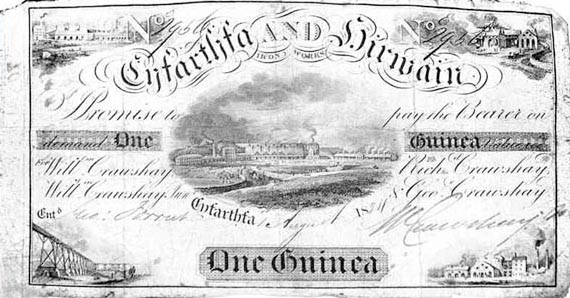 Next stage in the history of the ironworks began in 1819 when they were purchased by William Crawshay of Cyfartha. The period under the ownership of the Crawshay’s was to be the most successful for the Hirwaun Ironworks; however, the site was still plagued with problems. In 1820 the two furnaces were rebuilt and a beam blowing engine was constructed at the works by the Neath Abbey Iron Company. In 1824 another two furnaces were built on the site. Output figures increased dramatically during this period; in 1823, 4,160 tons of iron were being produced, in 1826 the figure was 7,020 tons and by 1830 this had increased further to 9,370 tons per annum.

During the 1830’s and 1840’s the ironworks were managed by Francis Crawshay and much of the output was sent to another Crawshay works at Treforest where bars and tinplate were produced.

However, the 1850’s saw a reduction in the fortune of the ironworks and in 1859 the Crawshay Family closed the works. Click here to see a slide show containing scanned pages from an accounting journal from this period.

The abandonment of the site by the Crawshays effectively meant the end of large scale iron production at the site. Although attempts were made by various lessees to make a going concern of the site it continued to decline until it was last used as a foundry. Cast steel was produced in small quantities at Hirwaun Ironworks in 1890.

The site was finally abandoned in 1905.