Education is the stepping-stone to success. Prior to the eighteenth century, education as only available for the “well-to-do” or gentry. There was no provision for the ordinary people or peasants – ” Y werin bobl”.Hirwaun, up to this time, consisted of just a few farmsteads and a few dwellings and was situated in two counties – Breconshire and Glamorgan. The River Cynon formed the boundaries between them so the village was in two parishes – the Parish of St. Cynog Penderyn and the Parish of St. John in Aberdare.It wasn’t until 1751 when John Wilkins and Thomas Mayberry set up the iron furnace in Hirwaun that the population grew. People moved into the area for this meant work. The village grew from the need to provide houses and services for the workers of the ironworks. The works, itself, was on the northern bank of the river in Breconshire but the village – houses etc. grew on the southern side in Glamorgan in the Parish of Aberdare. 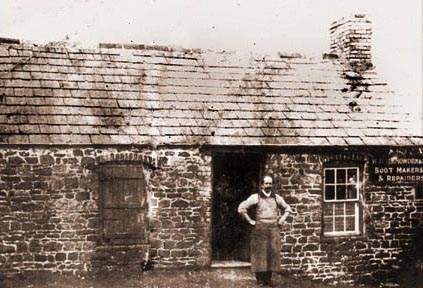 This is a photograph of Renowden’s Cobbler Shop in Station Road. This building is reputed to be the building of one of Crawshay’s works schools.

During this time the iron works changed hands many times and in 1819 it came into the hands of the Crawshay family. The workers had been concerned for some time about their children and the lack of education provided for them. To this end, in 1820, Francis Crawshay founded and promoted two works schools: The Miners and Colliers Works School. 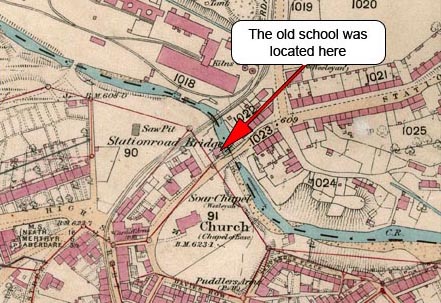 The schools were maintained by a levy of a halfpenny in the pound from the wages of the workers. It was also during this time – the 1820’s – a great religious revival swept South Wales including Hirwaun and numerous non-conformist chapels were built in the village Bethel, Nebo, Ramoth, Soar etc.

These chapels held Sunday Schools to teach people of all ages to read and write.The map above shows where the old school stood. In 1846, the Government in London appointed a Board of Commission to enquire into the state of schools in existence in Wales. The two works schools fell into this category. The report was known as “Brad y Llyfrau Gleision” – “The Treason of the Blue Books”. The works did not receive a very good report. It stated that were inefficient and denounced them as worse than being without any. Within days of the publication, the villagers of Hirwaun had arranged a special meeting in Ramoth Chapel. Its purpose was to set in motion a plan to provide all children of all denominations with a good basic education. 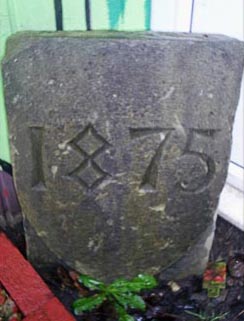 The leading light in the movement was the Rev. William Williams, the minister of Nebo Congregational Chapel. Things moved quickly – Lord Bute granted a lease in a site on a hillock opposite Nebo Chapel and by October 1847 tenders were invited for the building of the school.

The little school on the hill – known by the villagers as “Ysgol Pentwyn” – but officially as Hirwaun Common School – was opened on July 23rd 1849. Its first headmaster was David Lewis. 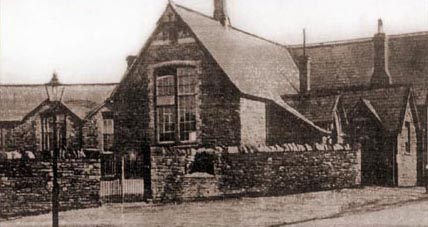 A photograph of Hirwaun School after enlargement in 1875

The population was continually growing and the school was no longer big enough to accommodate the increasing child population so the School Board agreed that bigger premises were necessary. In 1875 the school was enlarged and the photograph (below) shows how it looked after the extension with separate departments for the Boys’ School, Girls’ School and Infants’ School. Each department had it’s own Headteacher.Above: A photograph of Hirwaun School after enlargement in 1875The original building had been extended over the years and had been used for educational purposes until the closure of the Nursery School in December 2005. It was finally demolished in January 2010.