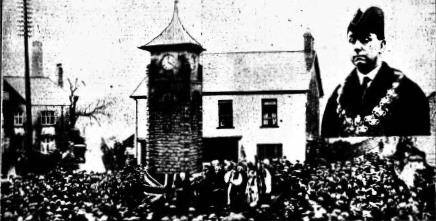 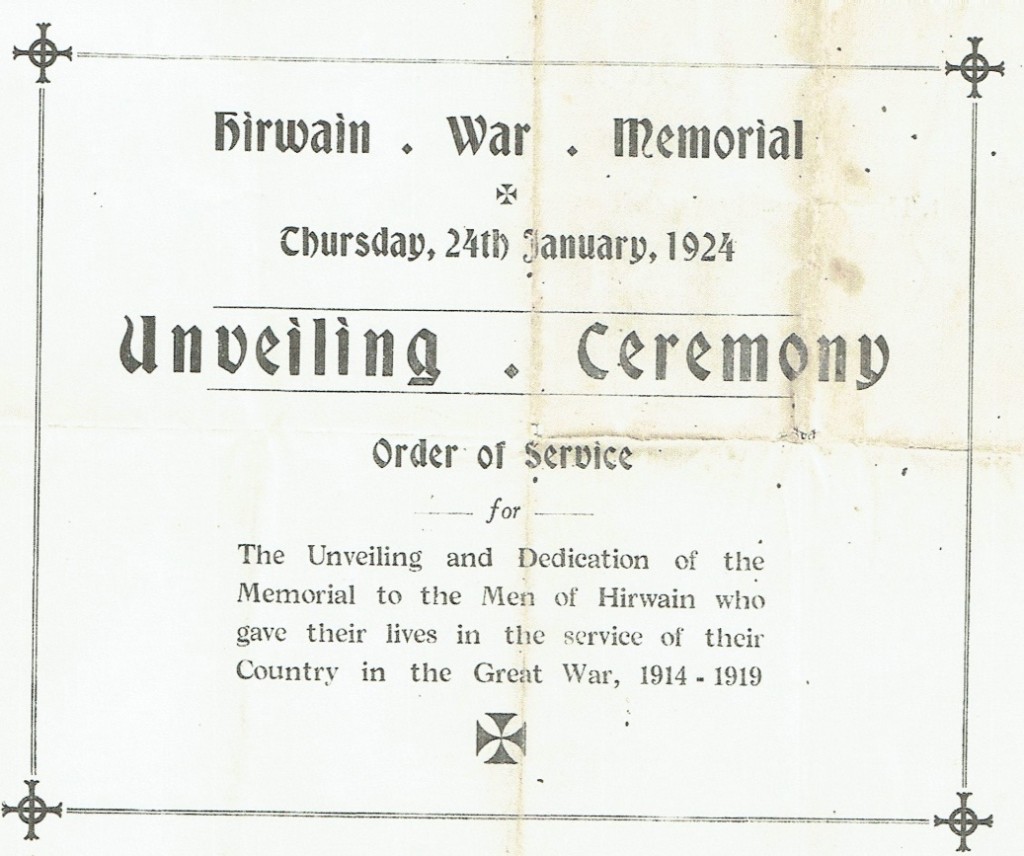 A procession composed of men, ambulance brigade, Boy scouts, and the local constabulary in charge of Supt. Rees marched through the main streets heeded by the local band.

The initial part of the proceedings was devotional and introduced by the Rev. Wern Williams.

Mr. Fred Jones, an ex-service man who lost both his arms in the war. assisted the High Constable in the performance of the ceremony as the representative of the Hirwain branch of the British Legion, and the “Last Post” was sounded. 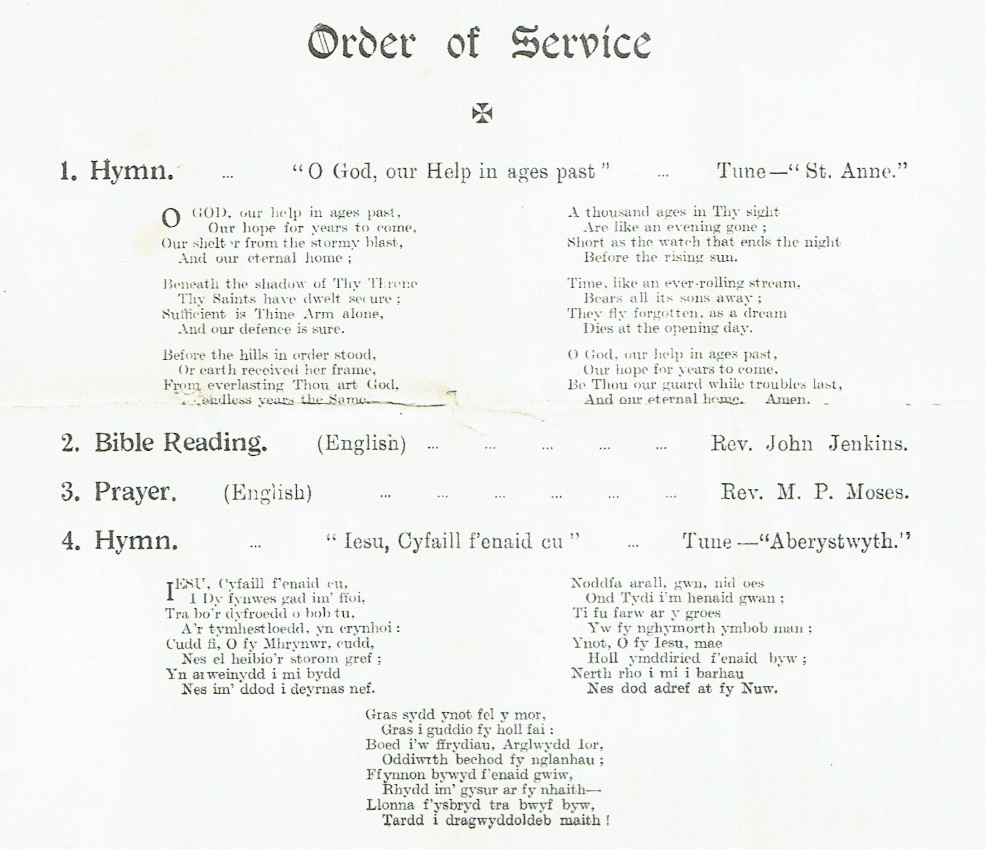 Threw in their lot Voluntarily

In unveiling the memorial Mr. Llewellyn gave expression to his deep gratitude for the privilege conferred upon him by being invited to perform the ceremony. He was personally acquainted with many of the local men who had given their lives in the war. They were miners who, in spite, of the fact that they were not compelled to join up, voluntarily threw in their lot, thus testifying to their great patriotism as a body. On the occasion, of his visit some time ago to Pontypridd Lord Allenby spoke of the misers as one of the best class of soldiers in history. Lord Allenby described their record during the war as second to none. He (Mr. Llewellyn) valued memorials of that kind for three outstanding reasons. While they commemorated the sacrifice and heroism of the gallant men, they were also a source of consolation to the bereaved relatives that such sacrifice and heroism had not been forgotten. The clock would provide a useful acquisition fur the inhabitants of the village, and the memorial would further be a lesson to coming generations as to the significance of war. Whatever was conducive to the prevention of war in the future should be hailed with the highest satisfaction, and in that direction the League of Nation’s deserved the highest support. 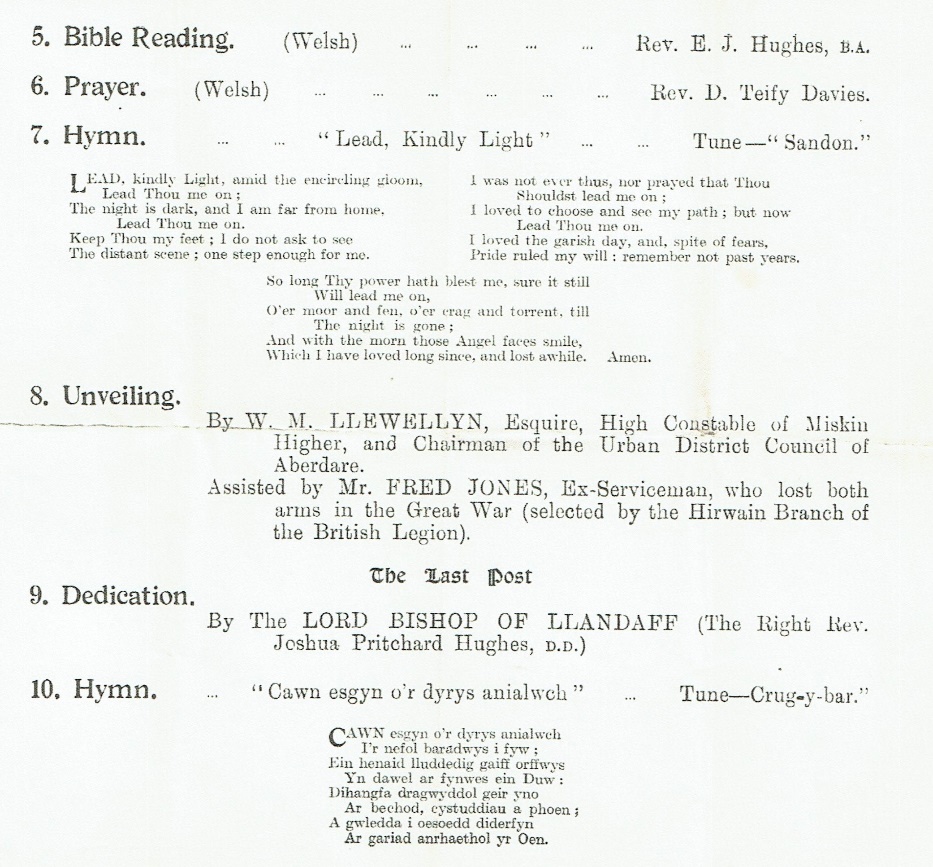 In conclusion Mr. Llewellyn congratulated the people of Hirwain on the possession of such an attractive memorial, and it was one of the greatest pleasures of his life to accept it for safe custody on behalf of the Aberdare Urban District Council.

The memorial was then handed over formally on behalf of the Hirwain Welcome Home Committee to Mr. Llewellyn.

Back to Memorial Clock