In 1922, Dr Ieuan Thomas the local G.P. invited about 70 people to a lecture on First Aid.  This led to the formation of the Hirwaun Division in 1923 with Dr I. Thomas as its Surgeon and Mr. W. Meyler as the Superintendant.

During the next few years various fund raising activities were organized to purchase equipment and uniforms etc. 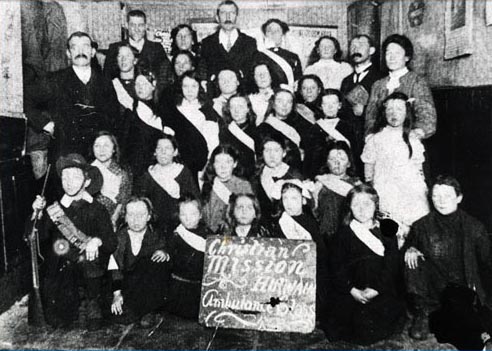 In 1927  The Cadet Division was formed with Mr. J. R. Jones as Cadet Superintendant.  We think this was the first Cadet Division in the Upper Aberdare Corps.

The Division held their classes in the Long Room of The Patriot Inn, High Street and later in the local school.

By 1939 sufficient funds had been raised to purchase a wooden sectional building.  The President at the time was Alderman W. M. Llewellyn J. P. the local coalmine owner.  He incentivized the efforts of the Division by pledging £1 for every £1 they collected.

The Officers at the opening of the Hall on Thursday April 20th 1939 were:
Dr. Ben Thomas (the new surgeon following the retirement of his father Dr. I. Thomas)
Supt. D. Williams
Off. J. R. Jones
Cadet Off. T. R. Jones (the first cadet to join)
All founder members

The day was completed by a tea at Duffryn Hall provided by the Officers’ Wives.

Over the years the Division has been successful in many local competitions and in training Mine Workers, Police and Ambulance Drivers. During the war years members joined and instructed the Civil Defense and the Home Guard units.

In 1968 it was decided to replace the wooden hall with brick construction, unfortunately both adult and cadet superintendents had to retire due to ill health.
Mr. G. Meyrick was appointed Div. Supt. with Mr. B. Powell, I. Bryant as Off and Mr. M. Stonelake and D. Sims as N. C. Off.

It was decided to carry on with the proposed plans. Rebuilding took 3 years. Classes were not suspended during this period. Building alterations were done during the summer months, the class night became a working night, all work programmed by the Supt.

The main work was done at weekends by Craftsmen members and non members. The cost was just over £2000.00.

June 1973 saw the reopening of the Hall. It was also the 50th anniversary of the Division. 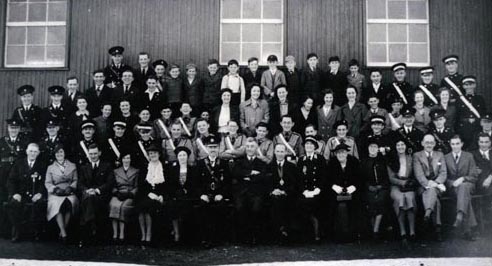 The Opening Ceremony involved the following officers:
Mr. R. O. Riggs, Commissioner of North Glamorgan presented the key to Staff Off. J. R. Jones
The Dedication of the Hall was by the Vicar J. Chard.
Ret. Supt. E. Jones unveiled the Commemorative Plaque.
Supt. G. Meyrick presented Staff Off. J. R. Jones with a Silver Salvo on his retirement after 50 years service.  Also presented on their retirement was Supt. T. R. Jones after 40 years and Member Mr. W. Cahill.
Numerous Certificates were presented to Adults and Cadets by Dr. I. Evans, Lady Williams (president of the local St. John Council) and Ass. Comm. Nursing Mrs. R. Protheroe.
Celebrations continued that evening with a dinner dance at the Boot Hotel Aberdare.

The 1970’s were exciting times.  We saw the formation of an excellent Parent Association, the re-establishment of the Nursing Cadets and, later on, an Adult Nursing Division.  Officers were Mrs. S. Evans S. R. N. Cadets, Mrs. J. Davies S. R. N. Adults. 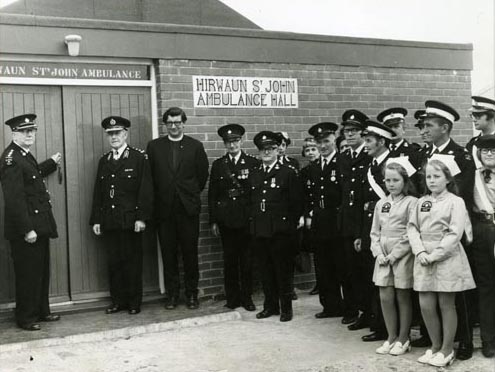 The Ambulance Cadets were successful in the Competitions field, winning at the National Eisteddfod in Ruthin and Carmarthen 1973, 1974.
They went on to win the Welsh Finals at Cardiff in 1974 and came second at the London Finals.
All the welsh Team and Officers at the finals were invited to City Hall Cardiff as guests of the Lord Mayor in recognition of their achievements.
The Team Squad was Capt. H. T. Meyrick, Sgt. M. Silzen, Cpl. H. Williams, R. Ewington and M. Griffiths. 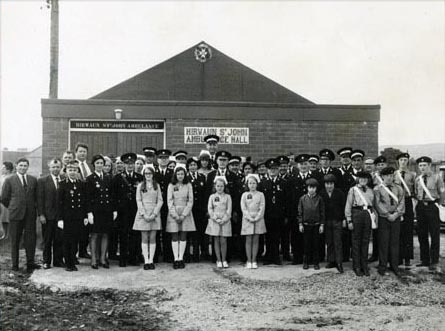 Cadet Cpl. E. Meyrick was selected by the Hospitaller’s Club to join them on holiday in Malta and Cadet Sgt. Rees was chosen to represent Mid Glamorgan in Germany.

To provide better facilities on duties, a caravan was purchased and converted into a First Aid Post.

In 1976 there were many changes of Officers and N.C.O. due to retirements and the promotion of Mr. G. Meyrick to Staff Officer and M. B. Powell as Supt; later to be replaced by Mr. D. Sims, who in turn was replaced by Mr. G. Passmore with Mr. B. Boulton as Sgt.

In 1977 the Cadet Div. had their Golden Jubilee with a parade and Church Service at St Lleurwg.  The Inspecting Officer was Dr. R. Treasure.  A Jubilee Certificate was presented to Supt. B. Powell by Lady Williams.