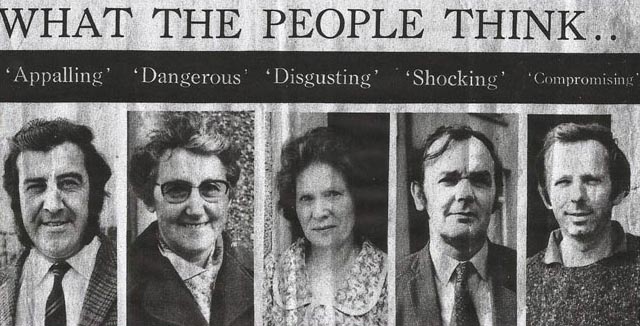 Pharmacist and member of the protest committee ,Mr. Desmond James said he thought the decision of the Secretary of State was “appalling”.
“He says our fears are groundless and are probably based on a lack of understanding of gas technology. Of course we are ignorant of gas technology, we’re just ordinary people.”
“And if there is nothing to be afraid of at the plant then why does the Secretary tell us that an Inspector of Explosives will be close at hand at all times.It doesn’t make sense to me.”
“As far as I can see this is only the start. I think it’s a safe bet that within a few years these tanks will be sproutingall over the mountainside like mushrooms.”
“Our fight is not over. If a place is worth living in it’s worth fighting for: I know for a fact that there are many people in this village who feel very militant about these tanks coming here.”
There’s one thing I’d like to know and that is what all these Gas Council people would feel if they had these tanks coming to their home town.”

Housewife Mrs. Margaret Davies of Station Road, Hirwaun was also very concerned about the Secretary’s decision.
“I’ve been to all the public meetings about the gas plant and I went along to the protest rally when a deputation of Hirwaun villagers marched through Cardiff to the Welsh Office” she said.
“I’m very much against these tanks being sited in Hirwaun. They say they will be blended into the background of the Rhigosmountains. But what they look like isn’t really the important point as far as I’m concerned. It’s the danger aspect of the tanks that worries me.
The heavy traffic passing the site of the main road, I should imagine, could have an effect on the safety of the plant. Image what could happen if something went wrong during a heavy thunderstorm. The people of Hirwaun will never really be sure.
If those tanks come here and if more of them are going to be sited here then I think the best thing anyone can do is to move away from the village.”

More angry comments came from Mrs. Eileen Evans of Caswell Close, Hirwaun who told us “It’s disgusting that the Gas Council should come to this village in this way and just dump their tanks here. This plant is something, they now quite well, we don’t want.
We prefer our mountains as they are and not enhanced by such monstrosities as enormous gas storage tanks. It’s fair comment that the Tower Flats are not beautiful but they do house people.
As far as I’m concerned this plant would always be a potential time bomb. I’m all for progress but lets have these tanks sited where they could do the least harm if something were to go wrong.
As it is, the flats will be in line with the tanks and if anything happens it won’t take much to shake the flats.”
Mrs Evans added, “ When they put the tips in Aberfan, no one thought any thing was going to go wrong there, but just look what happened.”
“The Gas Council are just sweeping aside all the public objections and the people of Hirwaun are wild about it.”

Headmaster of Rhigos Primary School and Chairman of the Hirwaun Protest Committee, Mr. Aubrey Morgan told us his reactions to the Secretary’s decision were ones of disappointment, shock and surprise.
“I thought our protest stood some sort of a chance” he said, “but now we’re getting organised ready to fight this plan once again.”
Mr. Morgan said a committee meeting had already been arranged and a public meeting would be held shortly afterwards.
“But what we do next will depend entirely upon the public reaction to the decision. We will not move unless we have the support of the community.”
“Some of the people I’ve spoken to have expressed complete and utter hostility towards the plans. I also think the Secretary has contradicted himself several times in the course of his letter,”
Mr.Morgan said the Secretary had stated that he felt employment opportunities would not be driven away from the area by the plant.
“He says this despite expert evidence presented at the inquiry which stated quite categorically that the plant WOULD likely drive potential job providers elsewhere.”

Garage proprietor Mr.Hywel Davies, who took an active interest in the public inquiry earlier this year, told us: “This is the decision I expected from the start.”
“It was stated at the inquiry that there was no viable alternative site to the one at Hirwaun.”
“The Gas Council have modified their proposals so that the plant presents only the minimum of intrusion on the villagers of Hirwaun.”
As Mr. Davies had proposed at the inquiry , the tanks will be sunk to bed rock and a great amount of landscaping would be done around the site.
Mr. Davies was slightly disappointed that the Gas Council had not agreed to make the tanks shorter and wider as he had suggested. “There was no overwhelming reason presented by the Gas Council why this shouldn’t be done,” he said.
“I don’t think these plans will be a disaster for the village as some people are trying to make out,” he added. “I think the Gas Council have compromised as much as can be expected especially considering that none of the objectors were able to suggest a viable alternative.”