1839 saw the setting up of a second Welsh independent Church in Hirwaun. The Rev. Joseph Harrison helped to set it up.

The first place of worship was a small church building. They worshipped here until 1845 when they converted the church into two houses called “Tai’r Capel”. 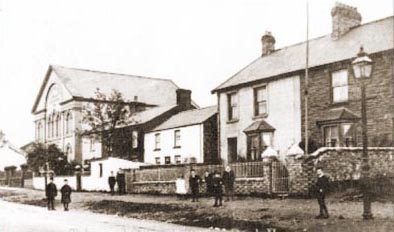 In 1879 many members of Nebo joined Tabernacle and a new church was formed near the Old Victoria Hall which later became the Hirwaun Billiards Hall. With increased members it was decided to build a new chapel in Brecon Road. The foundation memorial stone was laid in June 1881 . Tabernacle was rebuilt to seat 400 worshippers.

The first minister of the new Tabernacle was the Rev. Thomas Edmunds of Brecon College who remained there until 1885.

The last service was held at Tabernacle on 22nd October 1970. The chapel was
demolished in 1971 and a dwelling built on the site.