The Welsh Baptist cause began in the village in the early 1800’s. They were small in number and initially held their meetings in the homes of members. As their numbers grew, they joined with three other groups – Calvinistic Methodists, Independents and Wesleyan – in premises provided by George Overton near the river in Merthyr Road (Heolyfelin).

In 1822, the other denominations decided that they wanted a place of their own and in 1823 BetheI (C.M.) Chapel and Nebo (Independent) were built and the WesIeyans followed in 1824. Consequently the Baptists set about building their own place of worship in 1825/26 which was opened in June 1826 with a membership of 50. 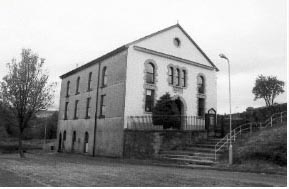 The name of the chapel is unusual for there are not many chapels of that name. The name Ramoth was given because one of the members worshipped in a chapel called Ramoth in Cilfowyr before moving to Hirwaun.

Ramoths’s first minister was the Rev. William Lewis in December 1832. He was also the minister of Calfaria (W.B.), Aberdare at the time. He left in 1834.

Between 1842 and 1857 the Rev. Benjamin Evans ministered at Ramoth. He was known as a powerful and eloquent preacher and was also the author of several theological works.

The pipe organ was installed in 1913.

The chapel closed in 1986 and was sold to the Pentecostal Mission , Merthyr Road. They refurbished the building, reopened it in 1994 and named it Ramoth Christian Centre.